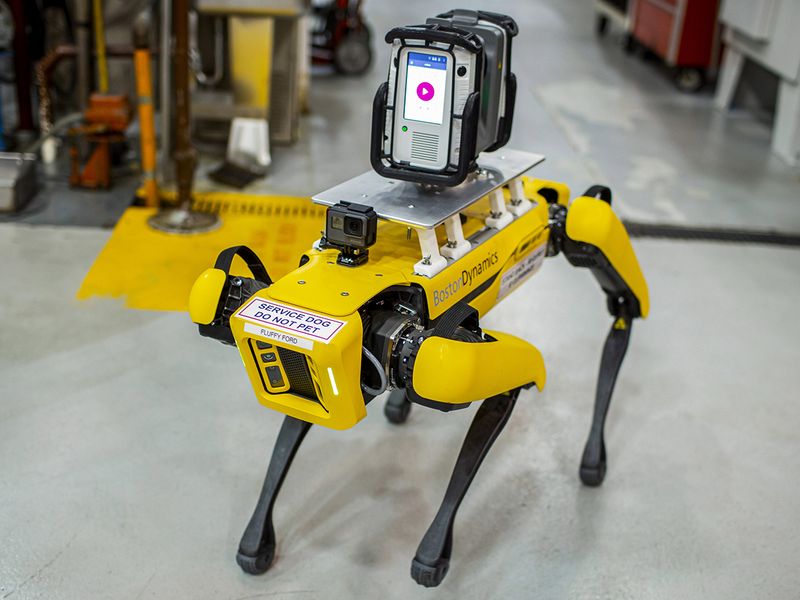 How a robot dog is supporting Ford

It runs, walks, and prances, rhythmically tapping its four feet before it sinks down on its haunches and crouches. ...

Leased by Ford Motor Co from Boston Dynamics Inc, the vividly yellow robot, can take pictures and videos of the factory with its five ‘eyes’ to help engineers design upgrades for workspaces.

With an accurate camera scan, “we can build those pieces within the workstation, and we can see if there’s any interferences or if everything new is going to fit,” said Mark Goderis, Ford’s advanced manufacturing centre digital engineering manager.

The robot named Fluffy, is controlled by an engineer with a handheld device and can travel up to 3 miles per hour (4.8 kph) for about two hours on its battery.

Fluffy can also ride ‘Scouter,’ a small round robot, through a factory to save power, while the two companions gather data. Wherever Scouter cannot glide into, Fluffy can fill in the gaps.

The automaker is testing the robots at its Van Dyke Transmission Plant in Michigan. The robots’ scans cost a fraction of the $300,000 needed for engineers to walk over millions of square feet in a factory to set up cameras on a tripod, Ford said in a statement.

But the new engineers are just helpers, Goderis said.

“Our goal isn’t to displace any of the workforce,” he said, but “automating our processes and making the engineers and people that work for our company more efficient and effective in building quality products.”

Boston does not provide lease terms but Fluffy’s robot model, named ‘Spot,’ can be purchased for $74,500.